Hello everyone. Long time no see. Here’s a new video!

It’s a been quite a while since we last updated this blog, eh? And we’ve only just realised that we never posted our previous video here. That was back in February 2014, and you can watch it here: 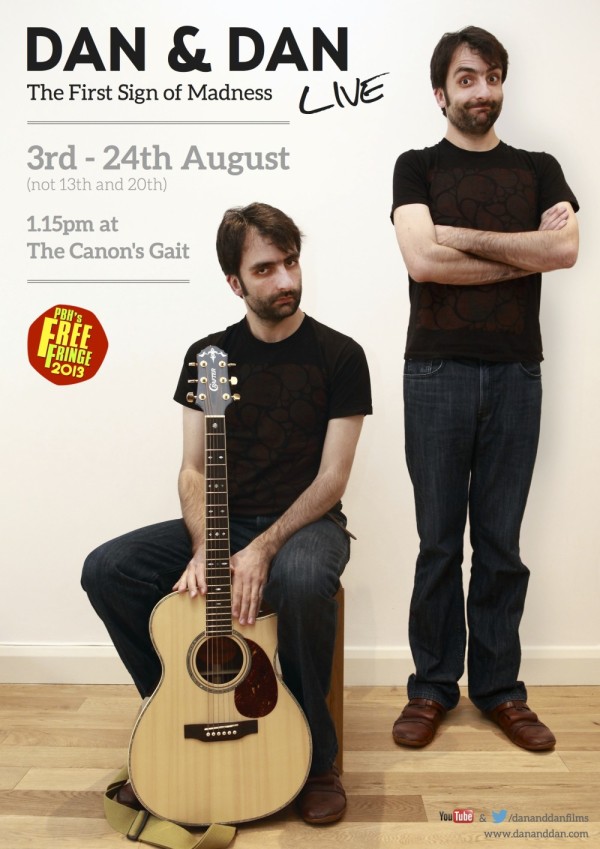 If you’re going to the Edinburgh Festival this summer (August, to be precise – and alarmingly a mere two weeks away) then we will insist, weepingly and pleadingly, that you come to our debut full-length show. It’s at 1.15pm at the Canon’s Gait venue, as part of PBH’s FREE Fringe and it’s going to be incredibly good fun and might just shatter you to your very core. We’ll be performing songs and will certainly do all the favourites (if you have favourites – if not they may yet become your favourites) and that’s right – you read correctly – it’s FREE.

Some people have expressed curiosity at how Dan & Dan would ‘work’ live. Can’t quite see what the confusion is… we both just walk on stage and start chatting and singing. Like everyone does, right?

Anyway, we’d love to see you there, so do pop along. Here’s me telling Dan about the show a few months ago:

In which Dan is slightly alarmed about Dan’s festive plans for a “Santa’s Grotto” in their living room.

There Will Be Juice

Here’s a belated blogging for our latest video.

I’m glad Dan got this out of his system. He seems more relaxed now.

It was a shame that Dan missed that opening ceremony, but he assures me that his book is very good and that the inside of his wardrobe is very comfortable.

Hello folks! Excited? We are. Here’s some background on this trailer.

For the last year or so Dan & I have been collaborating with some lovely people at the BBC. We’ve been making a taster for a Dan & Dan sitcom.

A taster is a bit like a pilot, but shorter. If the people in charge like the taster, they might commission a pilot… and then if they like the pilot, the next thing could be a series. But it’s early days at the moment – one step at a time.

The taster is about 10 minutes long, so this one-minute long piece is a trailer for the taster. So, to recap (pay attention): this is a trailer for a taster for a pilot for a series. I know it’s a little confusing, but stick with it…

Enjoy this little appetite-whetter. Hopefully you’ll get to see the full ten minutes soon, but in the meantime, if you like it, then please do share / rate / tweet / Like / comment, and generally spread the word like an 19th century cholera pandemic. And maybe – just maybe – you’ll help make Dan & Dan pop up on your telly.

Dan’s got a new dog. It’s not what he ordered though.

Here’s our response to the whole Kony 2012 thing which, depressingly, already seems like a very long time ago. It should be fairly obvious for our regular viewers that this isn’t a massively positive response. We only mention that because various Youtube comments have, alarmingly, appeared to take it the wrong way.

If you’ve not already seen it, here is the original heartstring-tugging video by Invisible Children.

Now as a crucial corrective, watch this sense-talking from Hank Green:

And this is the website that Hank links to, a beautiful and brilliant idea which everyone should definitely sign up to. It involves helping those in the developing world by providing affordable loans to get their businesses off the ground. Sign up and make your first $25 loan completely free. Ace, eh?

p.p.s.: You have signed up to our newsletter, right? Yes? Go on: http://tinyletter.com/DanAndDanFilms

Hello everyone! Our new video is below, featuring the magical properties of Dan’s hair.

And here’s our festive video, which we posted on December 24th.